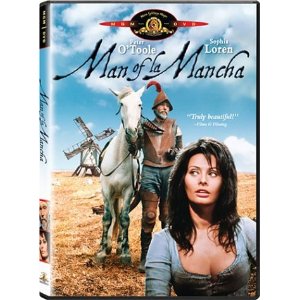 is tested by the Broadway treatment of Man of La Mancha, the film version of the hit stage musical. Everybody knows „The Impossible Dream,“ that indomitable hymn to, well, quixotic questing, and it is indeed the best of the Spanish-inflected songs. Despite the location shooting in Italy, Love Story director Arthur Hiller can’t elude the stagey concept (in which Cervantes, imprisoned by the Inquisition, acts out the tale of Don Quixote for his fellow prisoners). James Coco, as Sancho Panza, is overshadowed by the film’s irresistible Dulcinea: Sophia Loren, at her mature peak. (Her singing, alas, is not as ripe as her beautiful self.) If you love Cervantes for his earthy ironies, this movie will seem a curious slice of inspirational shtick.”