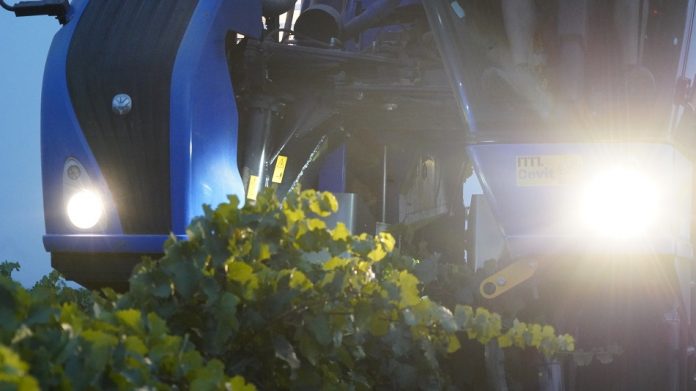 Early cycle varieties like white Chardonnay are the first to arrive at some La Mancha wineries.

This variety has a more sensitive ripening process than others, so it requires harvesting at a particular time of year to guarantee the aromas are at their best. This is the reason why the first grapes were picked at the start of harvest time in La Mancha Designation of Origin.

In the case of Chardonnay, with 1,620 hectares, it’s the fifth most widely grown variety in vineyards registered with the La Mancha Designation of Origin.

In the case of Chardonnay, with 1,620 hectares, it’s the fifth most widely grown variety in vineyards registered with the La Mancha Designation of Origin.

By night and by machine

By now the scene has become familiar every August in La Mancha vineyards, when the first signs of daylight reveal the work done by machines, tractors and trailers to collect the first grapes of the campaign. “We want to make the most of the lower night-time temperatures so the grapes arrive in the very best condition and start the initial fermentation processes without any corrections to the must temperature”, explains Fernando Villena, wine-grower, President of Vínicola de Tomelloso and Vice-President of CRDO La Mancha.

This means we can monitor fruit quality, which is good this year, “although we’ve had to watch out for mildew, the grapes are healthy.”

This year, once again, Ciudad Real is one of the provinces where the harvest has begun early. Specifically, at Vinícola de Tomelloso and Bodegas Altosa the campaign kicked off in the second week of August, at the same time as Bodegas Yuntero, in Manzanares.

The harvest has started with the fruit in healthy condition according to the overall technical parameters for quality, with an average of 12.5 points plus 3.4 pH of acidity in the wineries consulted within the La Mancha Designation of Origin.

Similar figures have been obtained from measurements taken by Bodegas El Progreso, in Villarrubia de los Ojos, where the white Chardonnay is due to be picked on 13 August.

In the province of Albacete, Bodegas Ayuso and Bodegas Lozano de Villarrobledo plan to get their campaign underway on 16 August; while Bodegas César José Velasco already set their hoppers going on 9 August with rapid cycle varieties that are more heat-sensitive, like white Gewurztraminer (covering a surface area of only around 24 hectares across the entire La Mancha Designation of Origin). They have recorded about 12 degrees Baumé and 3.37 pH of acidity.

In the province of Toledo, Bodegas Entremontes (Quintanar de La Orden), Bogarve 1915, (Madridejos) and Félix Sólis (in Puebla de Almoradiel), are planning to open their doors by 16, 18 and 20 August, respectively.

Lastly, some wineries in the Cuenca area of La Mancha, like Bodegas Campos Reales (El Provencio), Bodegas Puente de Rus (San Clemente) and Bodegas Taray (Las Mesas), will start their harvest with a few weeks delay, at the end of August.

All these estimations for the 2021 harvest in La Mancha might easily be brought forward due to the high temperatures expected in the second week of August.