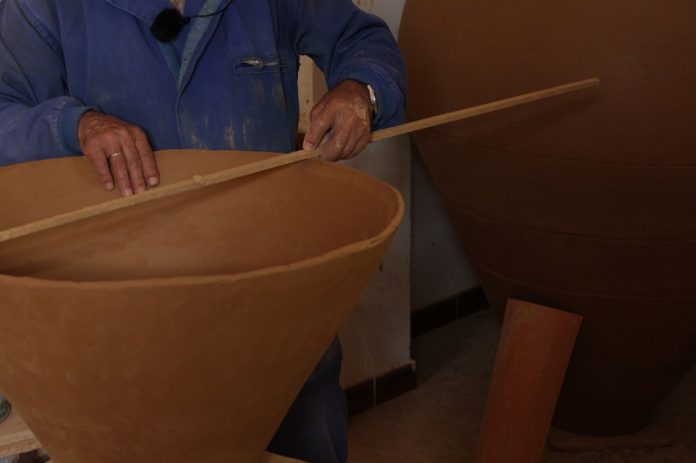 One of the largest producers of clay jars or amphoras, known in Spain as “Tinajas”, is Villarrobledo, where the artisans worked so hard on unique pieces that could reach four meters height and which have served for centuries to preserve the naturalness and authenticity of the wine.

Land of vineyards and amphora artisans, the people of La Mancha take advantage of everything that the land has to offer, from the vine to the mud.

The Orozco’s ceramic workshop is located in the heart of Villarrobledo, a family with artisan tradition that has been in the trade for six generations: José Gómez Orozco named the business, giving it his surname.

At 84 years old, Tomas Gómez, retired, has passed the legacy on to his daughter, Maribel Gómez. “The process is long and very laborious, which requires great expertise in all its stages,” as they claim.

In their workshop, it is merged the modernity that the 21st century demands with tradition, in order to manufacture “tinajas”, requested by wine cellars, or small decorative items (currently they can bake pieces of up to 160 cm in their oven, which reaches 800 degrees with up to one meter of flame).

In the process, they also have to take into account the characteristics of the climate (better in winter).

The potter Tomás Gómez is carried away by the memories of his small and austere old workshop, times in which “the days were harder” and “the pottery was well-known, when it was a work admired by the rest of the neighbors.”

For Tomas, pottery is passion, art and effort. However, the business did not always go well, as Gómez knows well, like in 1963 when the business drastically dropped due to the entry of cement into the market.

In the Orozco workshop there are exclusive pieces which the family has created with their own hands, thanks to the family legacy and the vocation caused by working the mud. You can find there “tinajas with net”. 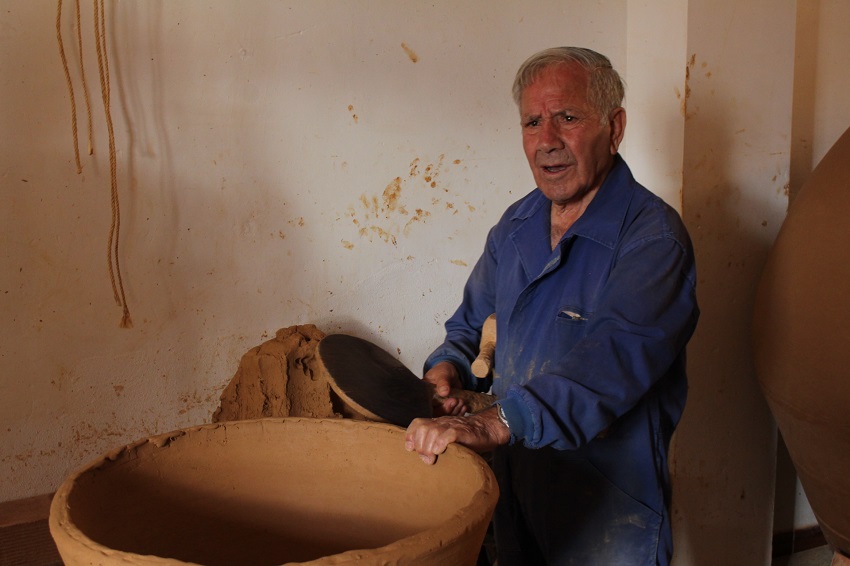 These, in the words of Maribel Gómez, were made with a clay mesh which allowed the exit of water but not the entry of polluting agents. That peculiarity made them perfect for those women and men who worked from sunrise to sunset in the fields.

The question here is, why are the Villarrobledo “tinajas” synonymous with quality? The answer is simpler than one could expect: because of the clay, a fundamental element in the conservation of wine.

It allows the micro-oxygenation and keeps the wine at a constant temperature, protecting its purest essence.

Tinajas craft with its own museum

Very close to the workshop there is a museum that shows the job and enhance and its art and its importance in the economy Villarrobledo.

As the promoter of local tourism María José Torres explains, the museum’s target is that “people can come to know, discover, value and learn the secrets of our most relevant artisan tradition, in a direct and participatory way”

In the journey through the “tinajas” world, the eye immediately captures the greatest peculiarity of the elaboration process: the kneading of the clay with the feet. This technique, in Torres’s words, “helps to soften the clay for its later manipulation with hands”. The rest of museum areas are focused on the cooking phase of the amphoras, being able to enter into the pot. The visit also includes photographs, graphic panels and other supports that review the most important data of the “tinajas” business.