The so-called organic gastronomy is trendy, and organic wine could not be less. Spain is on lead in terms of vineyards of this type and, among all the regions, La Mancha’s leadership is indisputable. Our land satisfies the conditions for the wine growing as it always has been.

What are organic wines?

The basis of organic wines is the return to traditional forms of production, without incorporation of any chemical additives, permitted by law.

This traditional model has reborn as an alternative response to intensive cultivations, which are very widespread today and needs chemical components to make more profitable the production, controlling disease at the same time.

Although the use of certain technological advances is not ruled out, the cultivation of organic wines is characterized by the care of the environment. In this way, it is intended that nature acts on its own whenever possible.

The concept of organic wine affects to the entire production process. The quality of the land and the climate conditions are essential for the vine to be developed in all its splendour.

How to know if a wine is organic?

Organic wines bear a label that certify it since 2010. This is established by European Union regulations, which delegate powers to the State members. In the case of Spain, this falls into the Autonomous Communities, responsible for the annually supervision of all producers.

The so-called ‘organic logo’ has been established for Community wines that meet these requirements. Here below we can see the logo:

“It can only be used in products certified as organic by an authorized control body. This certification confirms that wine meets the strict requirements of production, transport and storage”, it is explained by the institution.

Why is La Mancha ideal for organic wine?

The rainfed vineyards, the climate during pre-harvest season – low humidity and cool nights – and the commitment for traditional cultivation are some of the keys for organic wine in our region.

Low humidity conditions are an advantage in La Mancha to avoid the spread of pests.

“Castilla-La Mancha has a rather privileged situation that has caused a raise in the conversion of certain crops, such as the case of the vineyard, in recent years,” explains Miguel Amador, expert consultant in organic production, in statements to the DO La Mancha. 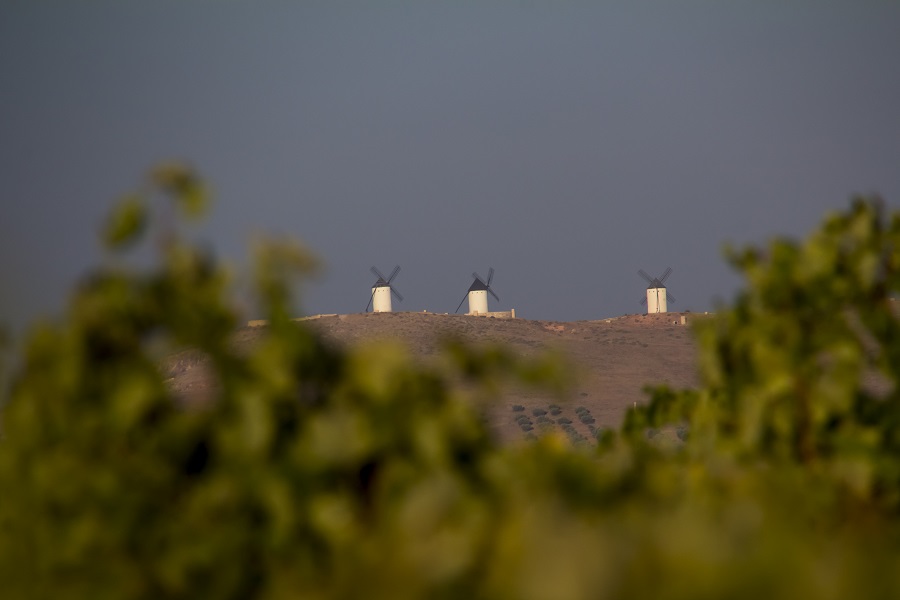 Among the virtues, Amador highlights the fact that there are no “critical areas of crop intensification, which are characterized by a very high use of land that can contaminate organic crops.” In addition, “pests and diseases are very low compared to other productive areas of Spain or the European Union.” And emphasized, “the traditional management of La Mancha is very compatible with organic farming.”

Under normal conditions, it is not necessary to work the vineyard of La Mancha with more than two or three treatments per year, while in other regions it can reach up to ten. “The further north, this problem is increased: the risk and is higher and management is more complicated,” clarifies the consultant.

For example, allowed products for organic wine tend to have a preventive nature, less effective than conventional ones. But in La Mancha, they are rarely necessary. Sulphurous, very widespread among organics crops and limited by Community regulations, are hardly necessary in our land.

Finally, this expert also highlights the organization of La Mancha wine sector. “It is not just that there is a very important vineyard area, the largest by extension, but also the fact that there is a very powerful sector to promote the development, thanks to the wine cellars”, says Amador, who concludes: “Otherwise, the manufacturing sector could not last through the time. There are many wineries throughout La Mancha region that can become organic.”