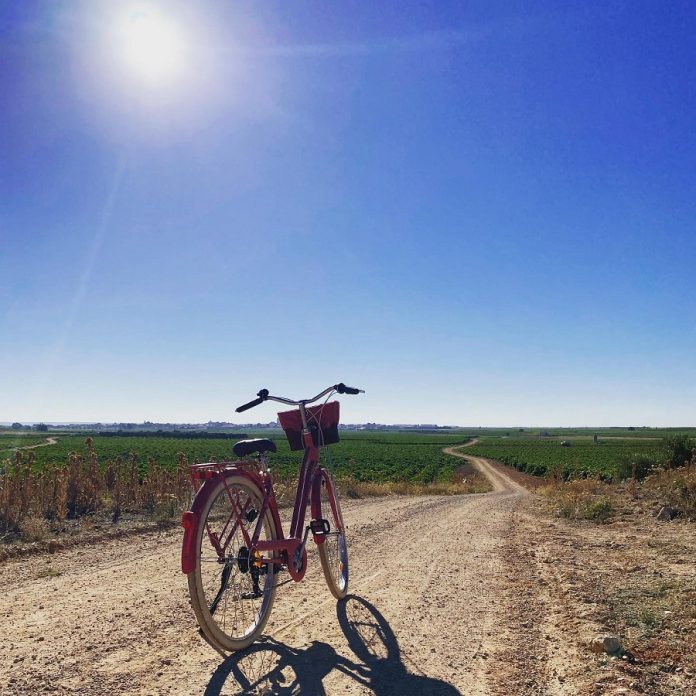 Like in Canada, the geographical location of the La Mancha region in the heart of the Iberian Peninsula gives it a continental climate that’s split into 4 different seasons. Each of them has its very own unique beauty, also reflected in its immense sea of vines. In this post we discover the beauty of the landscape of La Mancha in all of its 4 seasons. 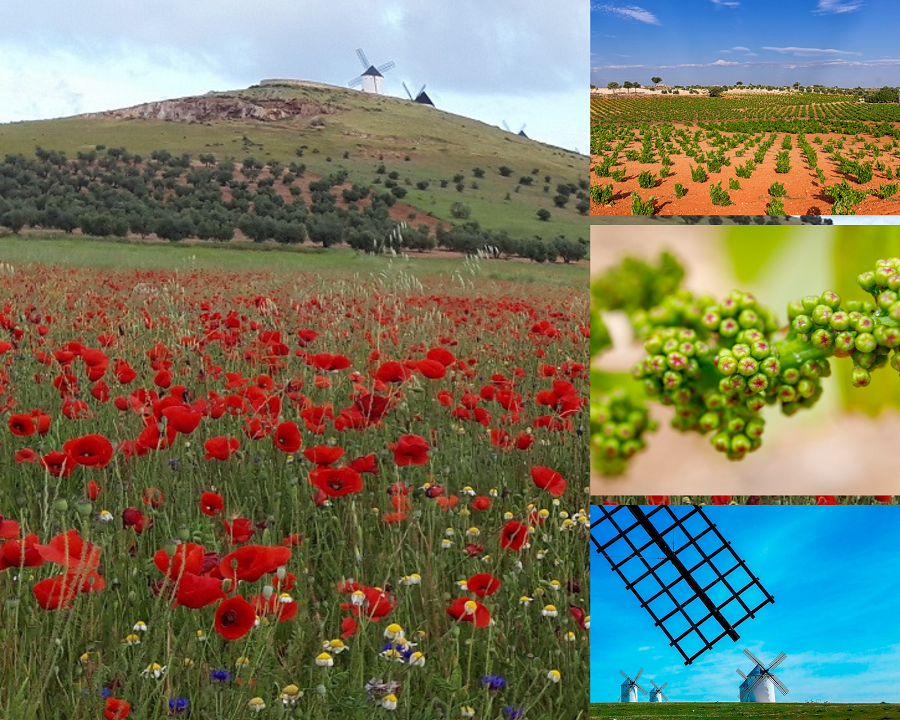 With the arrival of spring (March to June), La Mancha offers an unrivalled show of vivid colours. The temperatures become milder, giving rise to the ‘awakening’ of La Mancha’s vegetation and much of its wildlife. A turning point that ends the winter lethargy and which, among other things, is announced by vine tears, that is, the sap begins to circulate through the vines, offering this unique and beautiful phenomenon.

In spring, the vines ‘wake up’ and prepare once again for a new harvest

Spring is one of the most beautiful seasons, a time when vivid colours begin to take over and rule the La Mancha landscape, dressing and perfuming the great plains and surrounding countryside with poppies, jasmine and daisies. The colours blend with the green of wild herbs and, a little more timidly, the first shoots on the vines that will be growing vigorously all through the spring.

The Sun is the leading player in the hottest of seasons: summer 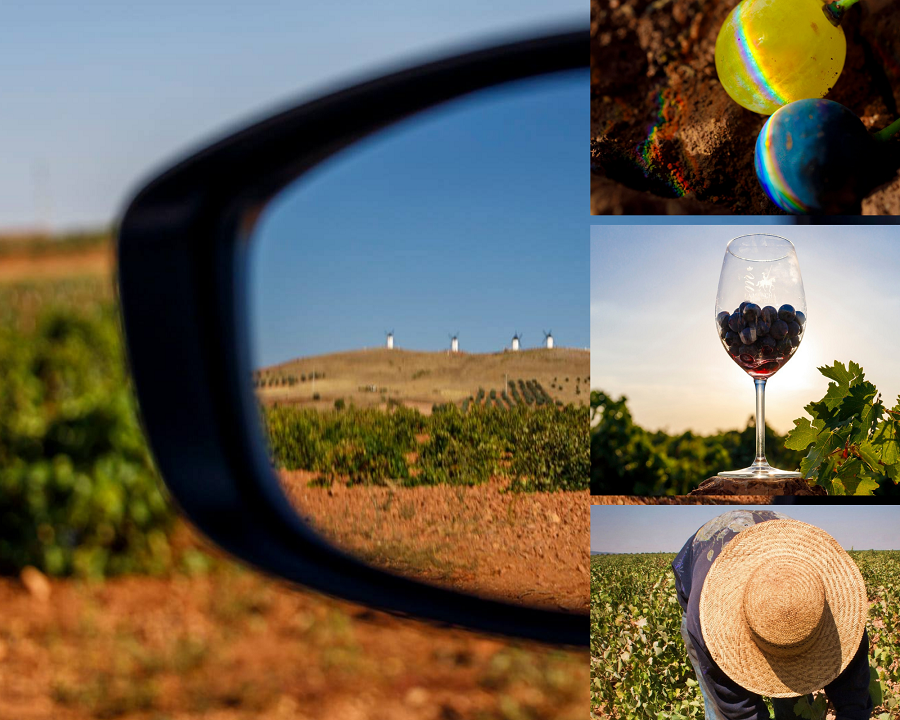 While mild temperatures marked the spring cycle, summer (June to September) is more extreme. Sun and heat gain ground. It’s true that one of the region’s great fortunes is its more than 3,000 hours of sunshine a year, which encourage the vines to develop as they should and the grapes to ripen perfectly. Although no longer so intense, vivid colours continue to make a wonderful sight on La Mancha’s landscape, always under the watchful eye of the region’s imposing windmills.

As summer starts to draw to a close, the grapes reach their ideal ripeness and harvesting begins

So, during the day the most attractive options for cooling down are to be found in the area’s natural water paradises, like the Lagunas de Ruidera. A dip in the lagoon followed by a chilled good white or rosé become infallible options to enjoy. At dusk, the temperatures give everyone a breather and encourage you to enjoy the incredible landscape, accompanied by an exceptional young red from La Mancha D.O.

Shades of ochre decorate La Mancha’s countryside in one of its most beautiful seasons: autumn 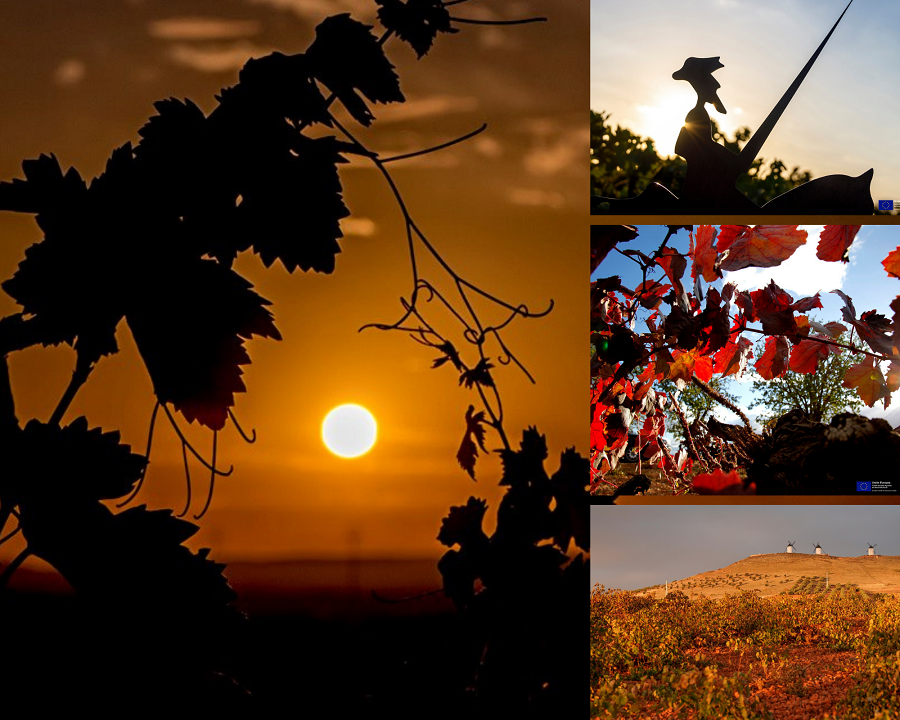 The end of the grape harvest comes when autumn has just begun (September to December). Temperatures start to drop and much of the local vegetation is preparing to protect itself against the colder months. This is why many of them lose their foliage in a process in which ochres, reds and browns take centre stage, offering a visual spectacle that’s well worth enjoying at first hand.

The vine branches and leaves give up their green colour due to the progressive absence of sun, chlorophyll and sugars in the plant.

This is undoubtedly a time when La Mancha shines with its distinctive and unique beauty. Just a few days during which it’s even more worth paying a visit before everything withers away. Enjoying its nature, history, culture, gastronomy and pairing them with the best wines; wines from La Mancha Designation of Origin, obviously.

In winter, nature sleeps and waits to be awoken 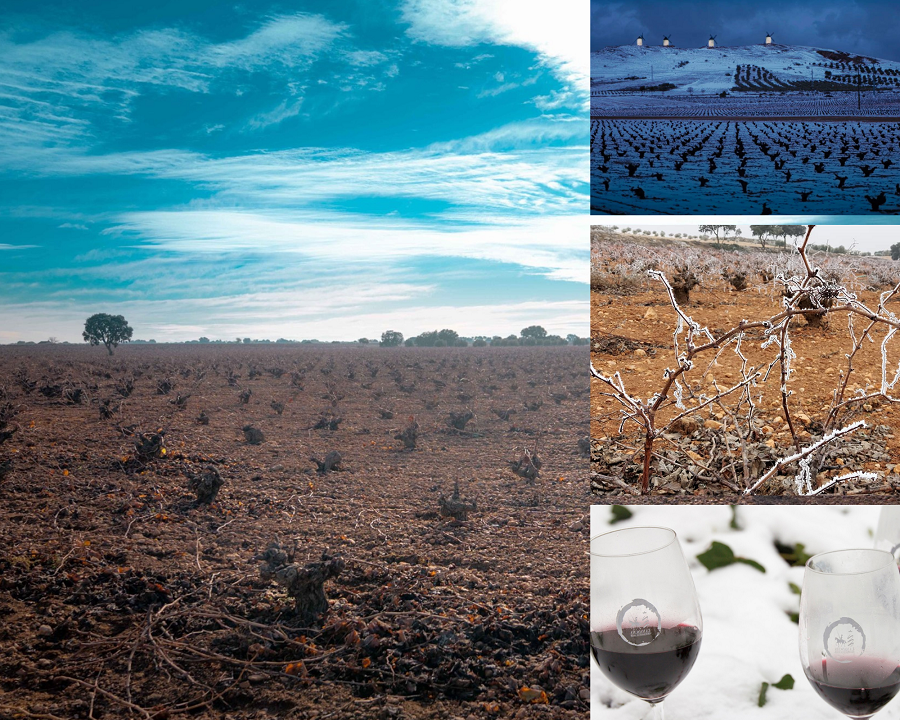 The cold makes itself at home in every corner of La Mancha with the arrival of winter (December-March). With average temperatures below 6ºC, the contrasts with the summer season (which can easily reach over 30º) are very striking. That’s why the vines, as well as other wildlife and vegetation, take a long break to avoid the damage caused by low temperatures.

In addition to their water and cleansing benefits, winter frosts help vines to heal after pruning

The silence becomes much more evident in La Mancha’s countryside, only interrupted by occasional rain and the roaring of the wind. Sometimes, there’s even snowfall in the region, resulting in not only an exceptionally beautiful landscape, but also doing the vines a favour by protecting them from pests and increasing the area’s water reserves.

There’s no doubt that La Mancha is a destination to enjoy all year round and in every season. Every traveller, whether they’re fond of the cold or love the heat, will find their own ideal time to visit and fall in love with everything that was once the inspiration of Miguel de Cervantes Saavedra’s seminal work, Don Quixote. The local wines also played a fundamental role in Cervante’s writings, not only in the stories he told but also throughout his life.